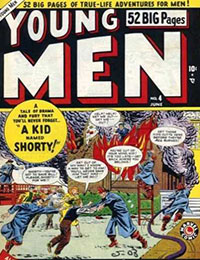 Young Men started as a romance-based title named Cowboy Romances for issue 1, 2 and 3. It then became a war-based title named Young Men with issue 4 (even adding the words on the Battlefield to its title for several issues) until issue 24, when it became a revived super-hero title. The changes reflected the changing moods of this particular era''s comic readers. With issue #24, Publisher Martin Goodman and writer Stan Lee tried to revive successful heroes from the Golden Age - Human Torch & Toro, Captain America & Sub-Mariner. Although initially greeted with enthusiasm, this mini revival was short lived. Within 12 months of Young Men #24, Torch & Cap''s own titles would be revived (and canceled again) - followed soon after by the cancellation of Sub-Mariner.