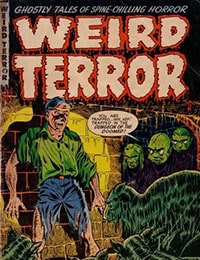 Weird Terror was a horror comic book series that ran from 1955 through 1958 and was one of the victims of the comics code which put a stop to most horror comics as violent content could be no more. Weird Terror is considered to be one of the most influential horror comics of its time, after the war ended superhero comics where loosing readers interests and they wear seeking more out there titles horror comics suddenly became very popular. Weird Terror usually contained six different stories every month by a variety of different writers and artists. Stan Lee admitted weird Terror was an inspirational to things such as Amazing Fantasy which is of course home of Spider-Man.