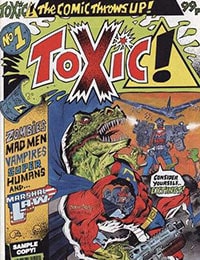 British anthology comic. Toxic! was formed by 2000AD veterans Pat Mills, Kevin O''Neill, Mike McMahon, John Wagner and Alan Grant. Unlike 2000AD (which Pat Mills launched back in 1977)Toxic! would allow creators work to be published while still retaining the rights and control over their work. Toxic! was intended to rival 2000AD by being more violent, brash and controversial, also by using full colour, unlike 2000AD which was still mainly published in black and white at the time.