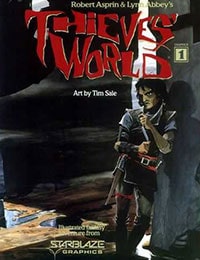 In the untitled first chapter of the graphic novel series adaption of Robert Lynn Asprin and Lynn Abbey''s shared world anthology series Thieves World, set in the dangerous, crime-ridden fantasy city Sanctuary, a new governor comes to the city, a prince, who along with his loyal, hand-picked royal guardsmen, ''Hell Hounds'' as they''re called, he intends to clean up the town. But a town run by thieves guilds, brothels, and street urchins - and the odd wizard or two - doesn''t clean up easily!