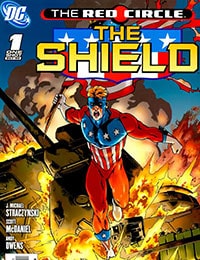 The Red Circle: The Shield Comic

J. Michael Straczynski dives into the DC Universe at last – and he''s bringing four of the finest heroes of the Golden and Silver Ages with him! Completely reimagined for the modern world from their original appearances in Archie/MLJ publications, these four heroes will show you a side of the DC Universe you''ve never seen before! Lieutenant Joe Higgins was dying in the dirt of a battlefield in Afghanistan when they whisked him away to a top-secret facility and saved his life with nanotechnology so experimental they couldn''t dare to use it on a living man. Now Higgins has been enlisted to a whole new mission – to be the public face of the American fighting man as the patriotic Shield! But today''s grueling military battles test the limits of patriotism and the limits of the technology that keeps him alive. And the shocking secret behind that technology may be too much for his bullet-riddled heart to bear. Featuring art from Marco Rudy (FINAL CRISIS)!