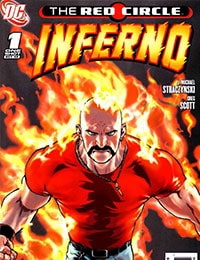 The Red Circle: The Inferno Comic

J. Michael Straczynski dives into the DC Universe at last and he''s bringing four of the finest heroes of the Golden and Silver Ages with him! Completely reimagined for the modern world from their original appearances in Archie/MLJ publications, these four heroes will show you a side of the DC Universe you''ve never seen before! The mysterious stranger was brought into the hospital with one name on his lips: Frank Verrano. He has no memory of who he was, where he came from, or how he could possibly be the only survivor of a bombing attack on a cruise liner that killed hundreds of people. But as deep as that mystery runs, a violent attack on the hospital opens a deeper one. How can this man burst into flames…and survive? And why does the man who stands in those flames, the man know as the Inferno, look nothing like the one who stood in his place just seconds before? Blaze into this thrilling issue featuring art by Greg Scott (GOTHAM CENTRAL)!