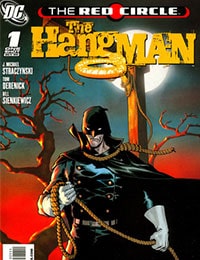 The Red Circle: The Hangman Comic

J. Michael Straczynski dives into the DC Universe at last and he''s bringing four of the finest heroes of the Golden and Silver Ages with him! Completely reimagined for the modern world from their original appearances in Archie/MLJ publications, these four heroes will show you a side of the DC Universe you''ve never seen before! The Civil War claimed many lives…but one of those lives still hasn''t ended! Union doctor Robert Dickering found himself on the wrong side of the battle lines, and despite his heroic treatment of a fallen enemy soldier, he also found himself on the wrong end of a noose! But a shadowy power stepped forth in the twilit moments between life and death and offered him a deal he couldn''t refuse: to forever roam the Earth, saving the lives of innocents condemned like himself – or hastening the deaths of the guilty! But in taking the seemingly righteous mission of the Hangman, has he accepted God''s work? Or has he become the vengeful fist of the Devil himself? Featuring art by Tom Derenick and Bill Sienkiewicz, the acclaimed team behind REIGN IN HELL!