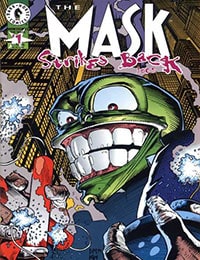 The Mask Strikes Back Comic

After the death of Big-Head an obsessed teen, Rick, heads down to the docks where the fire ended Big-Head''s spree, there he finds The Mask. Meanwhile, Lt. Kellaway, who is being told to slow down after being shot, goes to the hospital to look at a large patient with burns only to find out that the patient has escaped from the hospital and has stolen an over coat from the big and large shop and a packet of cigars. Kellaway knows then and there that it wasWalter who had escaped. Rick goes back to his apartment where his friends; Hugo, Archie and Ray were waiting for him, He shows off The Mask and then explains that he is going to let the world know that Big head is still alive! He then rushes off to cause mayhem throughout the city.

The Mask Strikes Back Chapter (Issue) List
Facebook Twitter Google Plus Reddit
Related Links
Untold Tales Of The New Universe: Nightmask Kill Shakespeare: The Mask of Night Conan the Barbarian: The Mask of Acheron The Mask Of A Thousand Tears The Man in the Iron Mask The Mask: World Tour The Mask: Southern Discomfort The Mask: I Pledge Allegiance to the Mask Grifter and the Mask The Mask