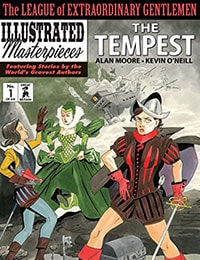 The League of Extraordinary Gentlemen Volume 4: The Tempest Comic

After an epic twenty-year journey through the entirety of human culture, Alan Moore and Kevin ONeill conclude both their legendary League of Extraordinary Gentlemen and their equally legendary comic-book careers with the series spectacular fourth and final volume, The Tempest. This six-issue miniseries is a celebration of everything comics were, are, and could be. Opening simultaneously in the panic-stricken headquarters of British Military Intelligence, the fabled Ayeshas lost African city of Kor, and the domed citadel of We on the devastated Earth of the year 2996, the dense and yet furiously-paced narrative hurtles like an express locomotive across the fictional globe. This is literally, and literarily, the story to end all stories. Heres how it begins.