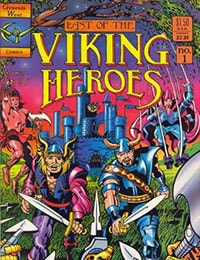 The Last of the Viking Heroes Comic

Near the end of the 12th century, the Vikings as we know them ceased to exist. Their barbaric blood had been diluted over the centuries and they had become more civilized. Violence became frowned upon and bold displays of it were outlawed. Decrees of all kinds were established to govern and control the people''s actions. Struggling to adapt in this new era and retain their strong belief in loyalty and honor in battle are the “The Last of the Viking Heroes.” These four valiant friends fight for survival in the changing times of the 12th century… Prince Sven, last of the Viking royalty, Erik, the swashbuckling Ladies'' man, Jon, the magician, and Tomgar, the half-native American warrior, cut a swath of action and adventure through mystical kingdoms of yore priding themselves on the warriors code of loyalty and honor.