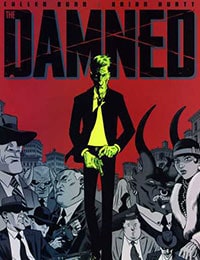 The Damned follows the cursed criminal-for-hire, Eddie as he is repeatedly killed and reanimated to further the gain of a demon run prohibition era underworld. The world of crime is boiled down to the trading and selling of mortal souls to pay debts, drug costs and collections as the world becomes corrupt and wealthy. When mortal business gets rich, demonic business gets richer, however the souls of the damned only carry so much value.Territory and the upkeep of good business are important too. As a Jack of all trades, Eddie is summoned by Big Al, a demonic crime boss to investigate and smooth over a peace treaty deal between the two biggest crime families in the city. Eddie has been dead and rotting in a ditch for three days after having his throat cut open by one of his many enemies. Each death brings Eddie closer to a translucent realm of spirits for mere moments before his return to the living. He''s pissed, equipped with a pistol, a tailored suit and a plethora of scars, Eddie''s gotta play it smart, play both sides, and tap every resource he''s got because the fate of his eternal soul may be at stake if the demons dealings go sour.