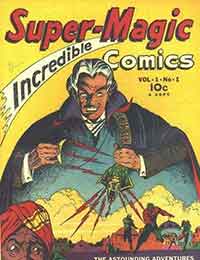 While the comic started in Vol. 1 # 1 as Super Magic comics, with Vol.1 # 2 the title was changed to Super Magician Comics and remained such until it''s end with Vol. 5 # 7 (whole number 55) and featured the adventures of Blackstone the Magician based very loosely on the real stage magician of the time, along with other magical characters such as Ellis the Magician, Red Dragon and others, as well as featuring some of the most racist and jingoistic covers and stories of any comic in the 40''s, and that took some doing.