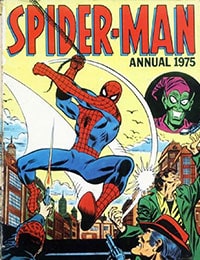 Having appeared previously in Pow! Annuals and one TV21 Annual, Spider-Man finally headlined his own U.K. annual in 1974. Initially published by Grandreams in conjunction with Marvel UK, the annuals reprinted US Spider-Man tales from various different Spidey titles, alongside features and games. In the 1980s new illustrated text stories were also included in several annuals. The annuals skipped 1987 and 1988, then stopped after 1993 for a few more years, before returning in 1996 and 1997, hoping the extra interest generated by the UK showing of the 1994 Spider-Man cartoon would boost sales.