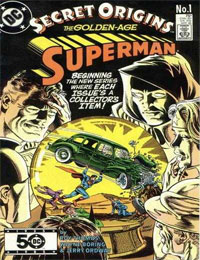 Secret Origins ran a total of four years and is most notable for explaining the post-Crisis origin of many DC Comics characters. While the series addressed many mainstream character origins, it also succeeded in bringing to light the back stories of more obscure DC characters such as The Creeper, Rocket Red, and Plastic Man. Secret Origins often put villains on center stage as well as heroes, with each issue generally running in a 48 page, double-sized format.