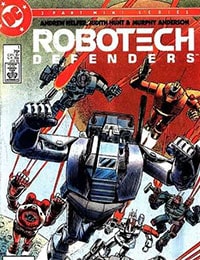 Robotech Defenders was a two issue mini series published by DC Comics from January 1985-April 1985. The title was originally slated as a monthly three issue mini-series but according to the editors note in issue two, the change was made for reasons too numerous to mention. To compensate for an entire issue, the second issue featured no ads and issues two and what would have been issue three were joined together.The series was poorly received by fans and critics.