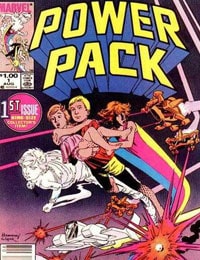 High above the Earth''s atmosphere, a white alien ship dodged blasts from a group of golden spaceships. Friday, the Whitey the Kymellian had sent information of Dr Power''s discovery back home, but the signal had been intercepted & jammed by the Snarks, who then set out to attack Whitey & his Smartship Friday. Meanwhile, inside a beach-side family home, the Power family remained oblivious of how their destiny was about to change. Eldest son Alex tinkered with his new telescope. Middle children Jack & Julie did the dishes (their father was impressed that Julie could read books while doing the dishes, while Jack threatened to throw the newly cleaned glasses at his brother). The radio announced UFO sightings, so youngest daughter Katie peered through the windows hoping to see aliens. As the alien fight raged, they entered Earth''s atmosphere. So when Friday was hit, Katie saw the light-show & screamed for everyone to see. Julie''s book fell in the water, and Jack insulted Katie for making it all up. To keep their kids quiet, James & Margaret Power decided to let them sleep on the porch.