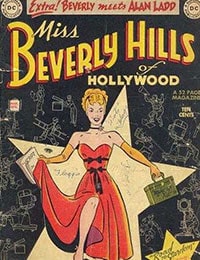 An odd entry into the field of celebrity comics, this title featured Miss Beverly Hills and her interactions with real life Hollywood guest stars including Alan Ladd and Wanda Hendrix. Beverly had a newspaper reporter boyfriend named Will Shire (A play on LA''s Wilshire Boulevard) and most stories revolved around her desire to meet movie stars and become a star herself. The series blended the celebrity, humor and romance genres with mixed results and sadly the title only made 9 issues. However Beverly did make a brief return as a backup feature in four issues of The Adventures of Bob Hope.