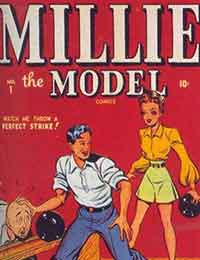 Millie The Model was Marvel''s longest-running humor title. First published by Timely Comics. Continuing through Atlas Comics to Marvel! The series ran 207 issues. A 28-year span that included Millie the Model Annuals (in 1962), one of the first Marvel Comics Annuals. She also received spin-offs including A Date with Millie Volume 1 and Volume 2, which itself continued as Life With Millie and then Modeling With Millie as well as the Mad About Millie series. Initially a humorous career-gal book about New York City model Millie Collins, it very quickly evolved into a broader, more slapsticky comedy. Though for a time becoming a romantic adventure series with all the same characters before returning to humor.