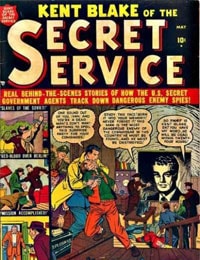 September 28, 1950: Congressman Rogers is knocked out by some Communist spies and taken away in a car, he is replaced with a Communist spy who resembles the congressman. The following day, the spy goes to a secret meeting among other members of congress to vote on the development of a new super-tank unaware that he is being watched by members of the Secret Service. In order for the vote to pass it must get unanimous approval, but it does not as the spy posing as Rogers votes against it. Later in the day, the spy is confronted by a man who poses as a newspaper reporter looking for answers about the vote. When Congressman Rogers acts aggressively toward the questions, the man reveals himself to be Kent Blake of the Secret Service and apprehends him.