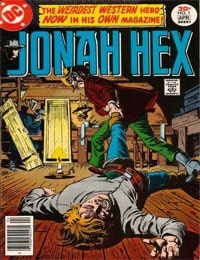 In true normal fashion, disfigured gunman Jonah Hex rode his horse out of Weird Western Tales and into his own comic. It was a testament to the character''s popularity, considering how conventional western themed comics had all but galloped off into the sunset. Then again, nothing was ever conventional about Jonah Hex. Longtime Hex scribe Michael Fleisher and artist Jose Luis Garcia Lopez detailed the bounty hunter travelling to Whalenberg, Tennessee, to locate Tommy Royden, the kidnapped son of a plantation owner. He eventually found Tommy, who had died after being forced to compete in a fight club-type promotion by racketeers Blackie Leclerc and Charlie Mange. After being apprehended and sealed ina coffin by Tommy''s kidnappers, Hex escaped, then forced the promoters to fight at the edge of a cliff, where both fell to their deaths. Returning to the plantation with Tommy''s coffin, Hex didn''t wait around for payment this time. Witnessing a mother grieve over her son''s coffin, he realized the family had already paid too much.