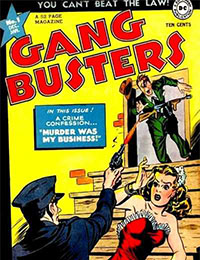 DC hoped it could beat slumping sales with its first entry into the crime comics genre. To minimize risk, DC licensed an established property - the Gang Busters radio program, which had been on the air waves since 1935 (originally under the name of the G-Men). Edited by Jack Schiff, the Gang Busters comic focused on FBI cases and stand alone crime stories. The first issue included tales such as Murder was my business and The case of the Iron-clad alibi. Later issues featured photo covers, a practice becoming increasingly common in the late 1940''s.