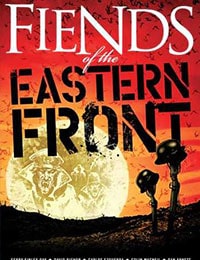 Fiends of the Eastern Front Comic

West Berlin, 1980, and workmen make a grisly discovery in a derelict building — the skeletal remains of Wehrmacht soldier Hans Schmitt clutching his diary. The story he tells in his journal is one of terrible creatures lurking on the Eastern Front during World War Two — of the shadowy Rumanian Captain Constanta and his evil platoon feasting on the living blood of their prey. Can Schmitt warn his comrades before more fall victim to the vampiric hordes?