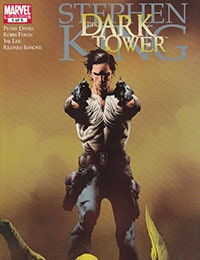 Beginning a bold new story arc featuring Roland Deschain and his beleaguered ka-tet on the run following the complete destruction of their beloved city of Gilead! And when such as Gilead falls, the pillars of reality itself—the six beams holding all of existence together—begins to crumble. The satanic plan of the Crimson King to return all of existence to the primal state of chaos is nigh. Plus, just in time for the fun, it's the return of master storyteller Jae Lee to the role of penciler! Don't miss it.