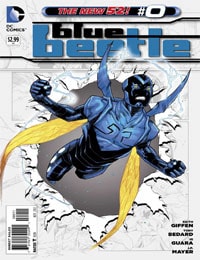 This is the origin story of Khaji Da. Khaji Da is created by a group of aliens known as the Reach. On it''s first mission it tries to attach itself to a power child whom would later be know as Lady Styx. It the process of merging with Lady Styx she implements her powers to manifest what she calls dollies to ward off the attack. These dollies break the legs of Khaji Da sending it into a retreat where it is attacked by a Green Lantern and plummeted to earth.