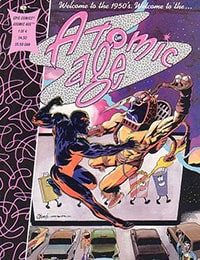 Atomic Age #1 is a comic whose story involves the arrival of an alien humanoid on a US Air Force base located on a fictional island in the South Pacific. He is dubbed the Nimbus, as he appeared from the clouds and returns to the clouds, and is from the artificial planetoid Helix. He does not have much memory nor does he know where he is or who the inhabitants of Earth are, he just knows he has to kill, via his electricity control powers, other alien humanoids who also arrive on Earth at the same time he does. There is a sub-plot involving the desire of a journalist to cover these events and some over the top exaggerated Air Force personnel who also desire to capture and control Nimbus.