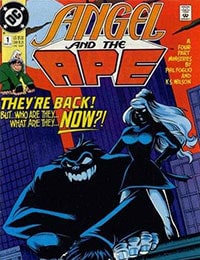 She''s blond an beautiful. He''s big and hairy and his knuckles scrape the ground when he walks. They''re Angel O''Day and Sam Simeon - a.k.a. ANGEL AND THE APE - and they''re back to star in a miniseries that pits them against one of the greatest threats ever faced by man and ape alike! Angel is a tough private investigator, Sam is a cartoonist (hey, a talking gorilla''s got to work, right?)...and Sam''s got a problem. He''s momentarily been turning human. But who''s going to believe his story...except his friend and partner Angel, of course? Mixed up in this mess is Angel''s meta-human sister, Athena (also known as Dumb Bunny of the Inferior Five) a group of gorilla goons and Sam''s dangerous grandfather...the noted Flash adversary Gorilla Grodd! And, as gorillas are popping up all over the place to set mankind up for a big fall, Angel, Sam, Athena and the rest of the Inferior Five set out to get to the bottom of this hairy situation. Meanwhile, Grodd tries to bring his reluctant grandson back into the ape fold to help wrest control of the Earth from the humans...because without Sam, his whole plan will go straight down the drain.