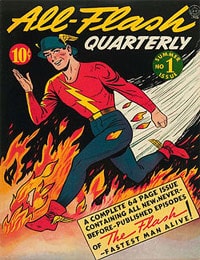 All-Flash Quarterly was an ongoing comic book series published by All-American Publications from 1941 until 1947. The first five issues of the title were published on a quarterly basis, but with issue #6 All-American changed the title to All-Flash and began distributing bi-monthly. The series featured Jay Garrick, the Golden Age Flash, who also made regular appearances in the anthology Flash Comics, as well as All-Star Comics and Comic Cavalcade.