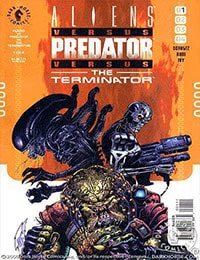 Aliens vs. Predator vs. The Terminator Comic

In the year 2032, John Connor and the human resistance forces wage war on the evil super-computer, Skynet. Sensing ultimate defeat, Skynet goes into hiding. Centuries later, it is awakened by stealth Terminators posing as human scientists. Now an even deadlier Skynet is creating invincible Terminator/Alien hybrids! Earth''s only chance lies in the hands of a legendary heroine named Ripley and . . . the Predators?! Even this ancient hunter race understands that Skynet threatens all life in the universe. Plus, they love a good fight! Featuring covers by Dwayne Turner (Spawn)!